The Ricoh Group is working to enhance its governance system in accordance with social awareness and various stakeholders aimed at strengthening competitiveness and continuously improving the system while ensuring transparency based on corporate ethics and legal compliance. In this way, the Ricoh Group will achieve continuous growth, and improve corporate value and shareholder value.
The Ricoh Group has introduced a corporate audit system. In addition, the Group is making efforts toward enhancing oversight of executive management by the Board of Directors and enhancing execution of operations by the executive officer system. Furthermore, by appointing Outside Directors, the Group is making efforts toward further enhancement of corporate governance by decision-making and oversight of executive management through discussion from their independent perspectives.
The nomination of Directors and Executive Officers and their compensation are deliberated by the Nomination Committee and the Compensation Committee, advisory bodies which comprise a majority of Outside Directors.
The results are reported to the Board of Directors. 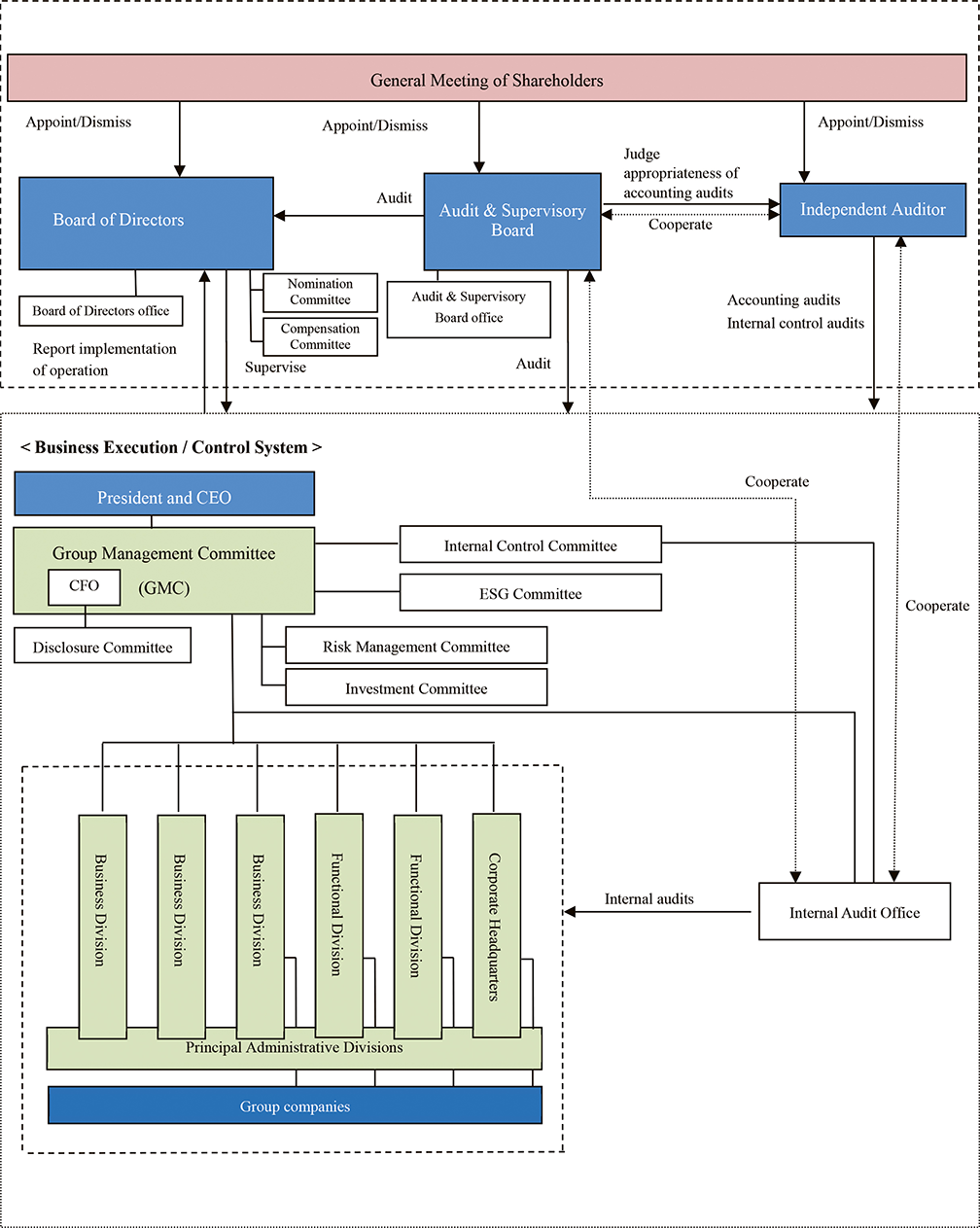 Board of Directors structure 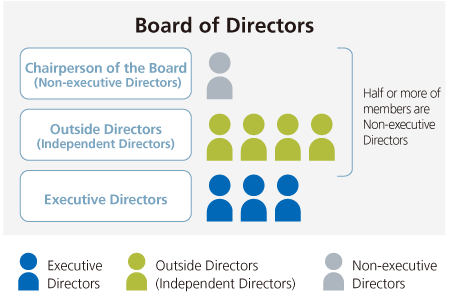 Audit and Supervisory Board

Audit and Supervisory Board members hold discussions to determine audit and supervising policies and the assignment of duties, and monitor corporate management. Audit and Supervisory Board members attend important meetings, including but not limited to the Board of Directors meetings, and exchange information regularly with the representative director.

Audit and Supervisory Board structure 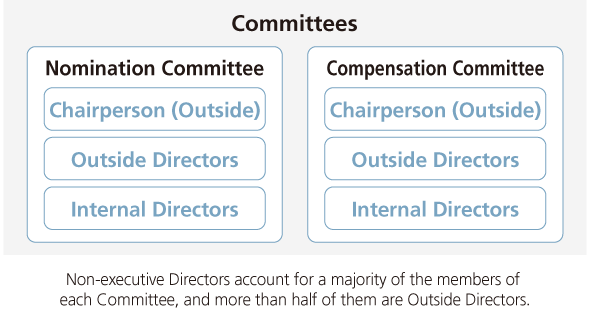 The Group Management Committee (GMC) consists of executive officers and is a decision-making body empowered by the Board of Directors. The GMC facilitates deliberations and renders decisions on the Group's overall management from the perspective of total optimization.

The Risk Management Committee is positioned as an advisory committee to the GMC and supports the decision-making of the GMC in the Group's risk management activities. It also promotes risk management activities of the entire Group and creates a highly feasible mechanism in line with the actual conditions by periodically revising the risk management system.
The committee is comprised of a chairperson appointed by the CEO, and representatives from each organization mainly undertaking the headquarters function. With its basic stance of “always be open to risks,” the committee convenes meetings as needed, and makes recommendations to the GMC even if risks are implied by parties outside the committee.

The Investment Committee is positioned as an advisory committee to the GMC, and verifies investment plans based on the validity of financial aspects including capital costs, and strategic aspects such as profitability and growth risks, etc. Members with expertise review and discuss diversifying investment projects to external entities in order to ensure consistency with management strategies and raise the efficacy of the investment while improving the speed and accuracy of investment decisions.
The committee mainly discusses investments from the aspects of strategies, finances, and risks, and its members include a chairperson appointed by the CEO, representatives from the business planning, accounting, legal, and internal control sections as specialists on each aspect as well as various experts depending on the project. The committee receives prior inquiries from planning departments to provide evaluations and advice after performing comprehensive discussion on the investment value of a project. Although the committee is not authorized to approve or disapprove of any investment projects, it assists the decision-maker in making objective decisions by clarifying the results of the committee's discussions on each project.
In order to improve the accuracy of decisions made in the entire Group to invest in external entities, the committee, which is an advisory body to the GMC, also handles projects below the minimum investment amount set out by the GMC. This is intended to strengthen the investment decision-making capabilities of the planning department as well as maintaining the flexibility of amending the minimum investment amount through recommendations to the GMC as necessary.

The ESG Committee aims to respond promptly and appropriately to the expectations and needs of stakeholders by continuously discussing medium- to long-term environmental, social, and governance issues faced by the Ricoh Group at a management-level and leading the discussions to the quality enhancement of the entire Group. The ESG Committee has the following specific responsibities:

The committee is chaired by the CEO, and is composed of GMC members, an Audit and Supervisory Board Member, and the General Manager of the Sustainability Management Division. The committee convenes quarterly and invites representatives of the business divisions associated with the subject of discussion, and provides a system to examine and discuss sustainability issues across the board.

*
TCFD
Task Force on Climate-related Financial Disclosures.
Established by the Financial Stability Board (FSB), the TCFD provides stability to financial markets by promoting information disclosure of climate-related risks and opportunities by companies, and facilitating a smooth transition to a low-carbon society.

Disclosure based on TCFD framework

Approach to Election of Directors

• Election criteria for Outside Directors

We believe that the Board of Directors of the Company should be composed of directors with management ability and rich sense of humanity in addition to various viewpoints and backgrounds, on top of multilateral sophisticated skills. When considering the diversity, it is a policy of the Company to appoint appropriate persons based on their personality and insight irrespective of race or ethnicity or gender or country of origin or nationality, etc. This approach ensures diversity, with respect not only to these attributes, but also with regards to expertise and experience in each field related to corporate management.

We are making ongoing efforts to strengthen and enhance corporate governance for our sustainable growth and improvement of corporate and shareholder value.

1) Nomination of candidates for CEO and Directors

3) Evaluation of achievements of the CEO and Directors

6) Approval or disapproval on the formulation, revision or abolishment of appointment/dismissal systems for Directors, Corporate Vice Presidents, and Group Executive Officers

Directors are evaluated annually by the Nomination Committee. From the year ended March 31, 2019, the former one-step evaluation was modified to a two-step evaluation. In the first evaluation, careful and appropriate deliberations are made on the soundness of Directors to continue in their duties, ensuring timeliness of appointment and dismissal. In the second evaluation, Directors' achievements are evaluated with a multifaceted approach, and their issues are clarified through feedback in an effort to improve the quality of management. The Nomination Committee's deliberations and conclusions on the evaluation of Directors are reported to the Board of Directors to thoroughly oversee whether the Director is sound to continue in the role.
Furthermore, evaluations are based on such standards as “Management oversight status as a Director,” “Financial aspects including key management indicators regarding business results, return on capital, etc.;” and “Contribution to shareholders and evaluation by capital markets.”

The CEO succession plan is an important initiative for improving shareholder value and corporate value of the Ricoh Group in a continuous manner over the medium to long-term and continuously fulfilling the social responsibilities of the Group as a member of the society.
From the viewpoint of strengthening corporate governance, the Group works to establish a CEO succession plan with procedures that are objective, timely, and transparent.

The CEO is evaluated annually by the Nomination Committee. From the year ended March 31, 2019, a two-step evaluation has been adopted. In the first evaluation, careful and appropriate deliberations are made on the soundness of the CEO to continue in his/her duties, ensuring timeliness of appointment and dismissal. In the second evaluation, the CEO's achievements are evaluated with a multifaceted approach, and his/her issues are clarified through feedback in an effort to improve the quality of management. The Nomination Committee's deliberations and conclusions on the evaluation of the CEO are reported to the Board of Directors to effectively oversee the CEO.

Key items for the CEO evaluation

Director compensation is used as an effective incentive to achieve sustainable increases in corporate earnings for the medium- to long-term, in the pursuit of increased shareholder value. In addition, from the viewpoint of strengthening corporate governance, measures to secure objectivity, transparency, and validity are taken in setting up compensation levels and determining individual compensation. The Company determines executive compensation based on the following basic policies:

Outside Directors with positions that are independent from business execution are only paid basic compensation, and they do not receive contingent compensation such as performance-linked compensation.
The retirement benefit plan was abolished as of the date of the 107th Ordinary General Meeting of executive Shareholders held on June 27, 2007. Total compensation amount for Directors paid in the year ended March 31, 2020 was ¥324,620,000.

Breakdown and ratio of Director compensation

Training for Directors and Audit and Supervisory Board Members

Training for the Company's Directors and Audit and Supervisory Board Members has the objective of enabling constructive discussion that contributes to improving corporate value and shareholder value via the oversight functions of the Board of Directors. It is conducted by acquiring and updating knowledge specific to the duties and environment for each of the Company's internal and external Directors and Audit and Supervisory Board Members. The goal of the training is to enable them to fulfill their roles and responsibilities fit for an executive that undertakes a position in the Company's important governing bodies.

Upon appointment of Internal Directors and Audit and Supervisory Board Members, training is provided to allow these persons to confirm their expected roles and duties, as well as acquire knowledge necessary to carry out duties, including knowledge regarding corporate governance, risk management, law, and finance. Even after appointment, training opportunities are provided via internal/external training and e-learning initiatives suited to each Director and Audit and Supervisory Board Member so they can update their knowledge.

Outside Directors and Audit and Supervisory Board Members are appointed from among those who have adequate insight and experience necessary to carry out duties. Upon appointment, to enable them to deepen their understanding of the Company's current status, they are briefed on topics such as business strategy, financial conditions, and organizational structure as well as make site visits to key locations as required. Even after appointment, by providing and sharing information on the Company's current status and management environment, etc., efforts are made to secure and improve the oversight functions of the Board of Directors and the effectiveness of audits by Audit and Supervisory Board Members.

To confirm that the above measures are being conducted appropriately, their results are reported to the Board of Directors.

From the viewpoint of streamlining and strengthening of business alliances and development of collaborative businesses, the Company shall be able to hold shares of the relating partners only when such holding of shares is deemed necessary and effective for the future development of Ricoh Group, while taking into consideration of the returns such as dividends.
Specifically, the Board of Directors will verify each issue whether the benefits and risks of the holding are worth the capital cost, and if the holding loses significance in the medium- to long-term, they will be reduced accordingly.

The Company will exercise voting rights attached to cross-shareholdings upon examining each agenda whether it enhances the corporate value of the investee in the medium- to long-term, or whether it impairs shareholder value, and determining approval or disapproval.